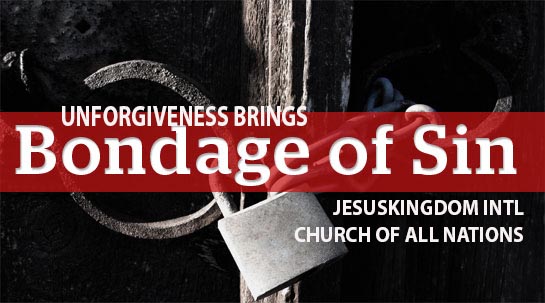 Let us take note that, because of our sins, we would be worthy of eternal death. But because of His love and mercy toward us, Jesus died in our stead, so we can be forgiven and our transgressions covered.

Jesus told a story that teaches us about the perils of unforgiveness. The story was about a king who wanted to check his servants’ accounts. He found that he had a servant who owed him a very large sum of money, equal to many years’ wages. The king told the servant that he, his family, and all his possessions would have to be sold. The servant begged for mercy and the king forgave him of his debt. This servant later found one of his fellow servants who owed him a small sum, about a day’s wages. He told his fellow servant that he would have to pay in full. His fellow servant begged for mercy, but the servant would not forgive the debt. When the king heard of this, he called his servant to him. He said, “I forgave you when you asked me. Should you not have done the same?” The king then sent him to prison until the debt could be paid. Jesus then said that our Heavenly Father will not forgive us if we do not forgive others. (Matthew 18:23-35)

Hating someone, holding an offense, or harboring a grudge causes many negative effects. The person who allows such attitudes in his life becomes miserable. His health suffers, as do his relationships.

When we don’t forgive others, it brings about a bondage to our souls that could be compared to being enslaved by people or bound by a substance addiction. This unforgiveness causes a bitterness within us. It locks in sorrow, anger, and strife; it locks out joy, love, and fellowship. This bitterness is a result of a proud spirit that seeks to keep score and gain revenge for perceived and real wrongs. If we refuse to release our offended feelings, they will eventually control us. We will be in bondage to them as well as in the bondage of sin before God.