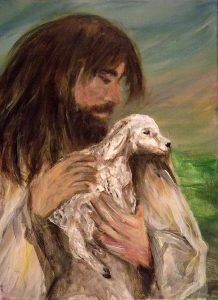 In the heart of every person there is a desire to be safe and secure. Little children are often afraid of being left alone. They also may fear the dark, or the unknown. Children crave the security of being held in the loving embrace of their parents. There they feel confident and protected. As we mature, the desire to be safe and secure never leaves us. This inborn desire was given to us by our Creator. While some men act fearless, in their hearts they may fear the unknown, suffering, accident, or sickness. They may also have an uneasy feeling about what might happen to them after death.

God is the creator of heaven and earth. Making man was the crowning act of His creation. He placed Adam and his wife Eve in a paradise home called the Garden of Eden. They were secure, happy, and free. Then Satan appeared in the form of a serpent and deceived them. Because of their disobedience to God, they fell out of fellowship with Him and were driven from Eden. (Genesis 3)

What a drastic change! Before, Adam and Eve had been safe and without fear. They were at peace with their Creator, enjoying His presence. Now, instead of inner peace, there was unrest, guilt, and fear. They were even afraid of God and hid from Him! They had experienced spiritual………… you can get access to the full reading by downloading the pdf HERE