The Power of Resurrection 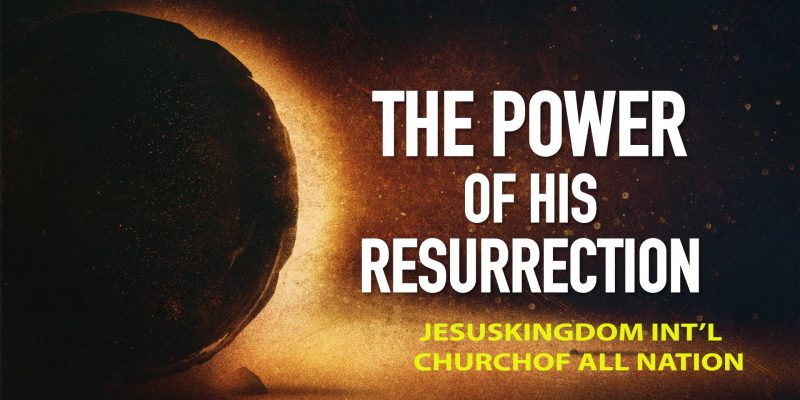 These words recorded in John 4:29 were spoken by a Samaritan woman with a sense of wonderment and awe. She had just met a Man at the village well who said He was the Messiah. Something about this Man convinced her that He knew all about her although not many words were spoken. She felt his love and compassion even though she was living in sin. With a sense of urgency she hurried back to her village, her water pot forgotten. “Come,” she said, “come see and hear for yourselves.”

Jesus came to earth with a message of hope. His love and compassion reached out to everyone, including the outcasts of society. He healed the sick, comforted the distressed, and preached salvation. Many received his teachings and followed Him. The religious leaders felt threatened by his message of love and humility, and plotted to kill Him. He was betrayed, arrested, and sentenced to die. As the angry mob followed, Roman soldiers took Jesus up the hill of Golgotha and nailed Him to a wooden cross between two thieves.

Jesus was crucified at nine o’clock in the morning. At noon the sky darkened for three hours. Afterward, Jesus cried with a loud voice, “It is finished,” and gave up his life. There was a mighty earthquake that rent the rocks and opened many graves.

Jesus’s disciples took his body down from the cross. They lovingly placed it in a new tomb and closed the entrance with a large stone. Early in the morning of the third day there was a great earthquake. An angel came down from heaven and rolled the stone away from the tomb. Some women who loved Him came to anoint his body, and they were surprised to find the tomb empty. They were met by angels who told them, “He is not here, but is risen: remember how he spake unto you when he was yet in Galilee, Saying, The Son of man must be delivered into the hands of sinful men, and be crucified, and the third day rise again. And they remembered his words” (Luke 24:6-8).

Following his resurrection Jesus met his disciples in an upper room. He showed them the wounds in his hands and his side and blessed them with the peace of God. He spent forty days teaching and speaking of the things pertaining to the kingdom of God. With his death and resurrection, the plan of salvation was completed.

One day while speaking with his disciples, Jesus told them to wait at Jerusalem until they received the power of the Holy Spirit. This would enable them to witness for Him wherever they went. When He finished speaking, He lifted up his hands, blessed them, and ascended into heaven. As the disciples watched Him ascend, two men in white clothing appeared and said, “Ye men of Galilee, why stand ye gazing up into heaven? this same Jesus, which is taken up from you into heaven, shall so come in like manner as ye have seen him go into heaven” (Acts 1:11).

So when the people of Samaria heard Jesus’s message, they believed on Him. They told the woman, “Now we believe, not because of what you said, but because we have heard Him ourselves and know that He really is the Christ.” The gospel of Jesus Christ, which is his teachings, death, and resurrection, is the power of God unto salvation. To experience salvation, come to Jesus, repent, and forsake sin. Believe on the Lord Jesus Christ as your personal Savior and commit your life to Him. Then through the power of the Holy Spirit you can love and forgive all people, even your enemies. As Christians continue in faithful obedience, Jesus gives power to live victoriously over sin.

Jesus is now in heaven interceding for mankind and preparing a place for the faithful (John 14:2-3). Someday soon He will return to judge the world. The apostle John wrote about that day. “And I saw a great white throne, and him that sat on it… And I saw the dead, small and great, stand before God; and the books were opened… and the dead were judged out of those things which were written in the books” (Revelation 20:11-12). God will separate the faithful followers of Jesus Christ from those who lived in selfish unbelief. He will receive all the faithful into the heavenly mansions He has prepared.

Do you know the One who knows everything about you? Are you experiencing the power of the resurrection today? If not, then come. Come and see the risen Lord!