Challenge to do right 2 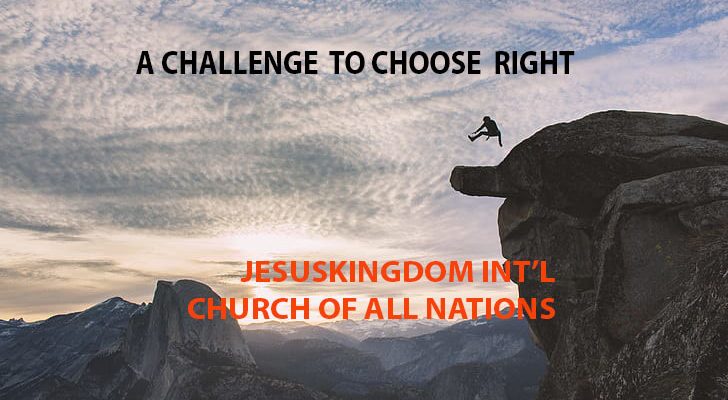 “Then Lot chose him all the plain of Jordan…and pitched his tent toward Sodom” (Genesis 13:11-12). The fields there were fertile and he was blessed materially, but he lost it all when Sodom was destroyed.

Joseph, as a young man, chose to be morally pure and honest, and he was awarded highest honors in the Egyptian kingdom (Genesis 41:41).

Joshua, a servant of God, challenged the children of Israel, “Choose you this day whom ye will serve” (Joshua 24:15). He said, “As for me and my house, we will serve the Lord.”

The people answered, “We will serve the Lord.” As long as they feared the Lord and served Him faithfully, they prospered.

During the time of the prophet Elijah, people had forgotten the mighty works the Lord had done for them, and many turned to idol worship (Baal), which greatly displeased the Lord. He used Elijah at this crucial time in a most spectacular way to show His unlimited power. On Mount Carmel Elijah called fire down from heaven which consumed the sacrifice he had prepared, thus proving that God is truly God. He asked the people, “How long halt ye between two opinions? If the Lord be God follow him; but if Baal, then follow him.” After they saw the fire come down, “they fell on their faces; and they said, The Lord, he is the God; the Lord, he is the God” (1 Kings 18).

Daniel, a young captive in the land of Babylon, purposed (chose) in his heart not to defile himself with the portion of the king’s meat, nor with the wine which he drank (Daniel 1:8). As a result he and his three companions, who likewise made the noble choice, were in favor with God and the king. Had they not made this choice, the examples of Daniel in the lions’ den and that of the three men in the fiery furnace would not be recorded in the Bible.

Jesus gave us a parable of a father who had two sons. One chose to collect his inheritance and go into a far country (into sin). It was not a good choice. After he spent all that he had, he realized what a great mistake he had made. He chose to humbly return to his father’s house. What a blessed reunion that must have been (Luke 15:11-32)!

Jesus our Lord was apprehended and brought before Pilate. The Jews cried out, saying, “If thou let this man go, thou art not Caesar’s friend.” Pilate pondered the situation before him. He considered Caesar (the world) and the Lord of glory who stood before him. He made his choice, and he delivered Jesus to be crucified (John 19).

Choosing the world with its pleasures will end in destruction (2 Peter 3:10-11).

Deciding to cast one’s lot with the children of God instead of going the course of the world is making a good and wise choice. Having Christ as our companion brings us into the presence of a wise counselor who will guide us in all decisions of life.